INTRODUCTION: A MEMOIR IN PROGRESS
http://rowingonacorner.blogspot.com/2016/09/a-memoir-in-progress.html

Chapter 1: A MEMORIAL FOR SOMEONE WHO DESERVES TO BE REMEMBERED
http://rowingonacorner.blogspot.com/search/label/CHAPTER%201

Chapter 4: TO BE OR NOT TO BE
http://rowingonacorner.blogspot.com/search/label/CHAPTER%204

Posted by Marlan Warren at 9:55 AM No comments:

Email ThisBlogThis!Share to TwitterShare to FacebookShare to Pinterest
Labels: TABLE OF CONTENTS

Thank you for stopping by! If you'd like to read this unfinished memoir, here's how: Click on the Chapters that are listed in the right margin. Otherwise, feel free to wander through the posts which are out of order.

I began writing in 2011 after finding out that Ed Clark, Jr. had died 20 years earlier. We had lost touch, and I was wondering why it seemed impossible to find him anywhere on the Internet. As a visual artist, poet, playwright and philosopher, I thought he would be jammin' somewhere on it.

Well, the last five years have flown by, and now I will finish it. Although the initial passion and sharp memories are less so in my mind.

I want to thank those who left comments: two are women I know personally who prefer to remain anonymous. The third was a surprise visitor: Ed's nephew, Richard Hicks, whom I've never met (nor heard of until he managed to track me down after discovering this memorial online). Richard has filled me in on some details of Ed's later years (and so has Ed's mother after that first phone call). A very rich story about how Richard became involved and is the major supporter of this book now. Thank you!

Posted by Marlan Warren at 5:41 PM No comments:

Email ThisBlogThis!Share to TwitterShare to FacebookShare to Pinterest
Labels: INTRODUCTION 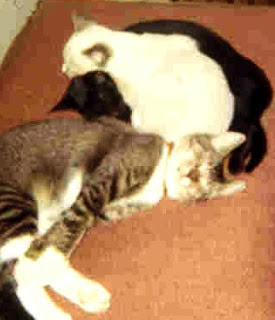 A few minutes ago, my calico raised her rear to meet my hand as I scratched it. I can never scratch a cat that way without remembering Barbara on the bed scratching her cat's butt--the cat pressing its rear-end high up into her hand--while Barbara purred:

Cats were our teachers.


Ed would point to Brownie resting meditatively and ask: "Can you imagine being that relaxed?"

Florida State University had Four Quarters. Tallahassee, Fla. had four seasons. Growing up in snow-less , I'd never seen seasonal changes. Tallahassee, being in the northern panhandle of Florida, gifted us with colored leaves and a fountain that looked like a big ice sculpture in the winter.

The above photo of the frosty FSU water fountain is not one of mine. It is from Google Images.


Fall saw the exit of Barbara after she graduated and returned to . Ed took over her subterranean studio, and enrolled to finish his senior year.


During his Dropout Year, Ed obtained a military psychiatric deferment from the draft (in full swing thanks to the Vietnam War which was sending boys home in body bags). That summer I drove him to his weekly psychiatrist appointments.


One day I asked how the session was and he answered, "Today we discussed psychiatric theories. What he thinks of R.D. Laing." Ed had me reading Laing's Politics of Experience and the Bird of Paradise. Laing argued that perhaps our experiences simply are. Nothing more.


It did not occur to me to ask whether Ed was also discussing his sexual predilections. Around that time, I saw a video of a theater sketch about a young man acting gay to get out of the draft--doing everything but actually having sexual intercourse with the stone-faced male psychiatrist--and still getting stamped fit for the active duty. So I was aware of the power of the "H" word, but Ed claimed to be faking madness. Sort of.

That Fall I moved out of the House of Neurotic Sexy Coeds into a large garage apartment with my name on the lease. I shared a room with a studious, funny Jewish girl named Joanne who didn't care for pretty roommates. The other bedroom was smaller and saw pretty roommates come and go.

The final pretty roommate was Carolyn who downplayed her prettiness and who also had terrible arthritis that was heavily medicated so Joanne was able to tolerate her with sympathy, at least for a while. 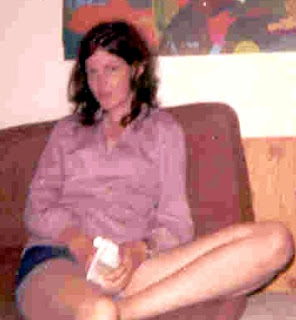 
Carolyn had played Michael in Peter Pan the year before so I knew she was a terrific actress. I was taking a directing class and cast her and a tall droopy guy named in Williams' one-act, Talk to Me Like the Rain and Let Me Listen. Rehearsals turned grueling. Carolyn was perfect for the part, but so insecure that she'd often burst into tears, blaming my poor direction or her inability as an actress.

Carolyn's final performance was mesmerizing, and turned out to be pitch perfect as her alienated flop-house lover. The two are connected by pain but not intimacy.


My professor gave me a "B+" grade because he "never saw the ball bounce between them."

Meanwhile Ed was working into the wee hours with huge slabs of stone and chemicals and paints in the lithography studio of the Art Department, and sleeping in the daytime. I would often open his unlocked door and crawl into bed with him. The gentle afternoon light streaming from the sides of the blinds across the bed…Ed’s soft skin and silky chest hair…we’d hold each other and drift through sleep like two morphine addicts in a Tennessee Williams play.

One day on a visit to see my mom in Miami, I told her about Ed.

Mom:  (very worried) I hope you’re not sleeping with him.

Me:  Well, actually we do sleep together. But nothing happens. I’m not going to get pregnant. We’re not having sex. I’m still a virgin.

Poor Mom. So close to the truth. But I told her that it was normal. As far as I was concerned.

The cat came and went. The same could be true of Ed's art nowadays. For his thesis, he was making lithographs of maps. Was it a "big fuck you" to the Academic Powers that were--anger at being forced to create in order to get a degree? Or was he running out of artistic gas? The lithos were technically proficient. But as far as I could see, that's all.

Like so many crucial topics that arose between us, I didn't ask for explanation.

If Ed's seemingly superficial art was connected to sadness for Barbara's absence, he hid it well. When not sleeping or working towards his degree, he was at my place hanging out and enjoying the Grand Central Social Station of my living room.

People from the past began to show up to mingle with people in the present. Bob from the summer house began a flirtatious friendship with Joanne. For all his bragging, there was something rather innocent about Bob, and the two of them tapped into a pleasant relationship that included studying together and dinners. If there were conjugal visits, I dared not ask details. 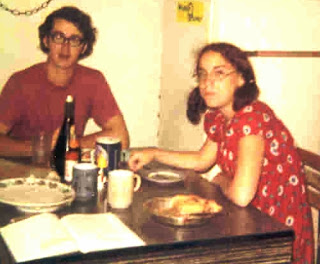 Bob and Joanne (above). I must have surprised them with my camera. There's a smiling one. Just need to find it and post later...


Once again Ed and I embarked on fresh excursions, this time with new friends. Our first was Studying in the Woods. Joann brought a sweet coed aptly named Joy. She was sweetly attractive, hippieish, and rich. Joy always looked as if she was going to break into Judy Collins' We Always Cook with Honey.


The autumn air was crisp but not cold. We wore our homemade-tie-dyed thermal underwear. Blankets provided support for books and bodies on the long grasses as we made nature our study hall.


There was one enchanted outing that involved a lot of people and a couple of cars. I only remember Ed and Joanne, but Joy was probably there and her friends. Maybe Bob. It was a coed camping trip, designed with little hardware and no tents. We built a fire and slept on the ground near Dog Lake. I doubt you could get away with that now.


Yes, it was all very Hansel and Gretel. No heavy breathing or sex. Except the one thing that made it more Woodstock than Grimm: mescaline. The plan was to go out to Dog Lake, take the mescaline, trip away and stay at the lake to avoid the trauma of driving home.


Before the mescaline, we hung out and explored. Off from the path, we found a stage. Without a second thought, I jumped onto the stage and did an improv:  I was a piece of happy bacon with my fellow strips inside the package--cozy and optimistic. But the trip home inside the shopping bag led predictably to foul play as my companions one by one were lifted out and thrown onto the grill. Until I met with the same scary fate, crinkling and wailing as I popped and sizzled.


Everyone applauded and commented. But the main thing:  Ed was impressed. He couldn't stop talking about how wonderful I was. I walked some distance ahead of him while he called out: "Hey, little piece of bacon...wait for me!" But I didn't. I shrugged and laughed and hurried on. Very pleased and a bit scared that he might soon be disappointed. It might be downhill from here.


I remember taking the mescaline and hanging out with Joanne. And I took a photo of a dog swimming in dog lake. 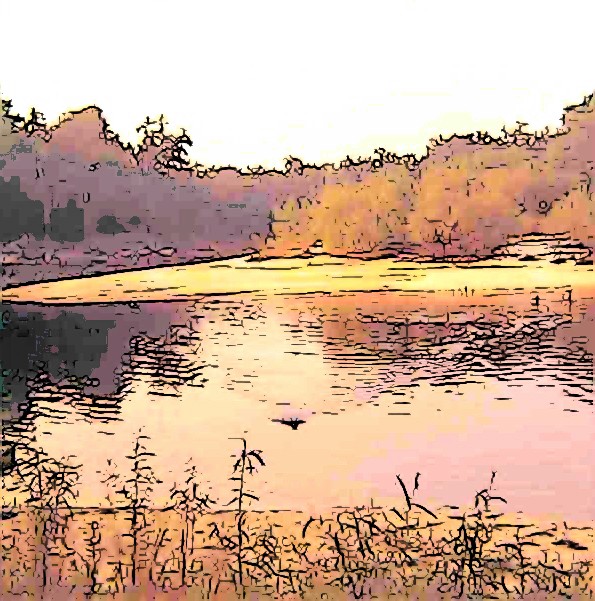 We weren't doing lots of drugs. Well, what do you consider a lot? Drugs came and went as frequently as the people. Grass and occasional hallucinogens.


I hadn't tripped since that fateful night when I walked all the way to Ed's home to bang on his door. But this trip was by far gentler in tone and fun because gentle fun people were with me.


Tripping, standing at the lake's edge with Joanne, I looked into the clear water and saw imprints of paw prints, reptile bodies, footprints so dark and big they appeared to be painted on the sand-colored mud below. A middle-aged lady with a bad perm and tight black curls approached and said in a man's baritone voice:


"Are there snakes in this lake?"


Joanne and I turned to look and both noticed that a tiny middle button on her tight white blouse was about to pop as her bosom pushed against it, and we laughed so hard we couldn't answer.

Posted by Marlan Warren at 9:33 AM No comments:

Marlan Warren
Marlan Warren is a journalist, novelist, editor, playwright, screenwriter, blogger, website designer, and publicist. She is the author of the fictionalized memoir, Roadmaps for the Sexually Challenged: All’s Not Fair in Love or War and the AIDS memoir, Rowing on a Corner. She reviews for Midwest Book Review. Marlan is also a filmmaker.